Fattet Hummus is a hearty Middle Eastern dish that’s usually served as a breakfast or brunch meal. Toasted pita chips, hummus, and garlicky hummus are layered in a deep dish and finished off with a sprinkle of toasted pine nuts and fresh parsley.

WHAT IS FATTET HUMMUS?

Fattet hummus is popular in Jordan, Palestine, Lebanon, and Syria. It’s usually served for breakfast on Fridays, brunch or as a starter and possibly a main for Iftar during Ramadan.

The heavenly tasting layers have different textures and flavours. Fattet hummus is best enjoyed right after it’s made as the toasted bread can still hold the crunch even after it’s soaked with chickpea water.  But it’s still amazing when served later and the toasted bread becomes soft.

So calling all hummus lovers out there, you NEED to try this dish! It’s a great vegetarian dish that you will really enjoy and can be easily veganised if you can get plant-based yogurt.

HOW TO MAKE FATTET HUMMUS

I strongly recommend that you cook the chickpeas from dried, it’s healthier and you can use the chickpea water to make this dish even more flavourful. If you use canned chickpeas, make sure that you rinse them before you use them.

What to Serve Fattet Hummus With

Usually, Fattet hummus is either eaten on its own along with a cup of sweet black tea with fresh mint leaves, or with a set of Arabic mezze. Such as hummus, foul mudammas, falafel, baba ganoush, mutabbal, and galayet bandora.

Fattet hummus is usually eaten on Fridays. Weekends in the Middle East are Fridays and Saturdays, and Friday is the day when the whole family gathers for either breakfast or lunch or both. Try this dish and it might become one of your weekend rituals as well.

I hope that you love this recipe as much as I do, and don’t forget to check out more of my Middle Eastern Recipes.

If you make this recipe, please don’t forget to rate this recipe and share a picture on social media. Tag #LittleSunnyKitchen in your posts as I would really love to see what you make! Thank you for supporting Little Sunny Kitchen, so I can keep sharing my family recipes with you for free. 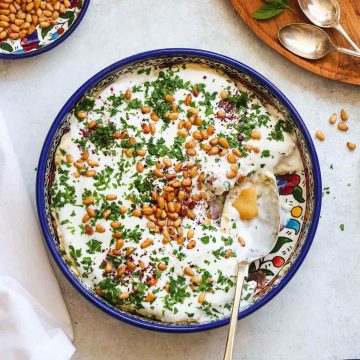 This recipe was originally posted on Feb 24th, 2017. And updated on May 18th, 2019 with new images. The recipe was also slightly changed.