Muhalabieh is a creamy Middle Eastern milk pudding infused with rosewater and topped with crushed pistachios.

In the Middle East people like to add roses to desserts. Rose petals, rose syrup, rose water and even rose jam are used. Pistachios are also very commonly used, they are either sprinkled over desserts or added to make cookies, baklava, yogurts, and ice cream.

This recipe is my Mum’s recipe. Although my Mum is Russian but she lived in Jordan for a while now. She loves Middle Eastern cuisine and in Jordan, she learned how to cook delicious Levantine dishes. I remember when I was a child my mum used to make this Middle Eastern milk pudding recipe infused with rose water, and always generously topped it with pistachios. This dessert is called Muhalabieh.

The recipe is very frugal and simple. It’s made from ingredients that you probably already have in your cupboards. It’s basically made with milk, sugar, rose water and corn starch. Cooking these 4 ingredients together will result in this exotic dessert with a hint of rose water and the most beautiful garnishes. I adore the color of the crushed pistachios with the rose petals, but the garnishes can, of course, be altered. You can add almonds, desiccated coconut, pomegranate seeds or even cocoa nibs!

In this post I’m sharing the traditional recipe with you, it’s the recipe that we usually make at home and very similar to what you would get if you order it at a restaurant or a cafe or buy it from a store. However, if you are trying to cut down on calories and make a lighter version, reduce the amount of sugar to 2 tbsp instead of 100 grams and use fresh semi-skimmed milk.

I personally like to eat Muhalabieh when it’s chilled, but some people like to have it warm right after it’s cooked. I also created this video to show you step by step how I make Muhalabieh. 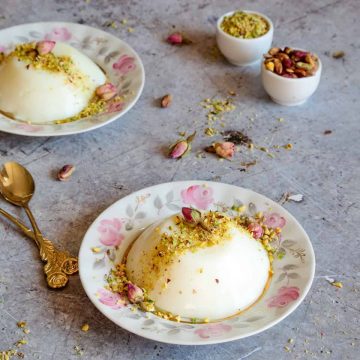