Molokhia or Mulukhiyah is a traditional Middle Eastern dish made with jews mallow/nalta leaves and chicken. It’s a staple in every Middle Levantine household. Usually served over medium-grain white rice, and a lemon sumac onion mixture.

Table of Contents hide
1 What is Molokhia
2 You Can Freeze the Leaves to Enjoy All Year Round!
3 How to Make Molokhia
4 Vegan Version
5 Recommended Tools for This Recipe
6 Molokhia

Molokhia is a very delicious and nutritious Middle Eastern dish. Very popular in Middle Eastern countries including Jordan, Palestine, Syria, and Egypt. It’s made from either fresh, dried or frozen Molokhia leaves (Jew’s mallow or Jute leaves or nalta) that are used as a vegetable in this recipe.

The leaves are boiled in water or stock, resulting in a thick soupy liquid often served with white rice on the side. The slimy effect of the Molokhia when it’s cooked is very similar to Okra but it’s the pleasant kind of slimy, not the sticky kind. And speaking of Okra, you REALLY need to try my Middle Eastern stewed okra recipe called Bamya, it’s absolutely amazing!

There are many ways in which Molokhia is cooked in Jordan, it can be cooked with chicken, meat (mostly lamb), or left vegetarian or vegan. But the chicken version is definitely the most popular. It’s usually served with rice, but sometimes we just eat it as a soup with a piece of fresh pita bread skipping the rice.

This recipe that I’m sharing with you is the Jordanian version of Molokhia, and what I grew up eating. Egyptian Molokhiya is quite different, they remove the stem from the lead and then finely chop the leaves with garlic and cilantro. I think that they also fry the leaves before cooking them to prevent them from becoming slimy (the slimy texture is what I really love about molokhia!).

Jute mallow or nalta jute leaves’ scientific name is Corchorus olitorius. The plant grows in Asia and Africa as a wild plant or crop. I also recently learned that this plant is also popular in the North and South African countries, India, Japan, Brazil, and the Caribbean. It’s not only used to make soups or stews, but tea could also be made from it. And sometimes it’s just added to soups to thicken them.

Jute leaves are rich in vitamin B6, potassium, iron, vitamin A and vitamin C.

The green leaves are never eaten raw. When they’re raw, they have a bitter taste. So they’re always boiled before they’re consumed.

The leaves are usually harvested between 6 and 8 weeks, normally in the summer. So every summer, my Mum and I make sure that we buy lots of jute leaves and then spend a couple of days just removing the leaves from the stems and either dry or freeze them to stock up for the winter.

We also make sure that we stock up on bamya/okra and green beans as these vegetables are only available fresh in the summer,  and your last chance to do that is mid-September. In the Middle East, this is what all women do, making sure that they have enough of these vegetables frozen or dried to be ready for the winter days. It’s a part of the culture to freeze these vegetables at home buying local produce, rather than buying frozen store bought molokhia, okra or green beans.

To learn the difference between Nalta leaves and Mallows, check out my Middle Eastern Mallow Khobeizeh Recipe that explains the difference,

You Can Freeze the Leaves to Enjoy All Year Round!

First, you will need to buy fresh molokhia and remove the leaves from the stems. The stalks are usually thrown away, and the leaves are left to be preserved and used later.

There are 2 popular methods to freeze molokhia:

1. Wash the leaves, then make sure that the water dries as much as possible. And vacuum seal portions of the leaves and then freeze. This is my favourite way to freeze molokhia, I also noticed that the leaves stay fresher this way and hold their colour.

You have the choice to either chop the leaves or leave them as they are but we always chop them as they’re usually too big.

2. Wash the leaves, then take a huge pot and drop the leaves in there with a little bit of water. Using a wooden spoon stir the molokhia for a couple of minutes until the leaves are wilted. Remove from heat, let the leaves cool down and then pack in freezer plastic bags and freeze. (You have the choice to either chop the leaves or leave them as they are but if you choose to chop them then do that right after you wash them)

This method is also great, but I feel like it requires more effort but very similar result in cooking. So choose whatever you think is better, as both methods work and are great.

How to Make Molokhia

This recipe is enough for 6 persons, so I make about 2.5-3 cups of uncooked rice to serve with the mlokhiyeh, you have to cook the rice (obviously!). Serve with plain rice or Lebanese rice, and then the molokhia soup and chicken can either be served in the same bowl/plate (like I did in my picture below), or serve in 2 separate bowls and top with onion sumac mix.

I would say that molokhia leaves are similar to spinach leaves, so if you’re a fan of spinach you will like mlokhiyeh. The leaves can be found in most Oriental shops and are often sold frozen.

Lemon also pairs very well with this dish so I always add extra lemon juice to my plate over the molokhia when I’m about to eat, and I like to have this with a chopped onion mixed with sumac, olive oil, and lemon juice (recipe is included in the recipe card below). Best food ever!

During the Christian fasting season in Jordan, fasting Christians make vegan versions of their favorite Arabic dishes. One of them is molokhia. I’ve made a vegan Molokhia so many times before and it’s equally as good especially when served with lots of freshly squeezed lemon juice or the onion sumac lemon version.

The vegan Mulukhiyah is cooked exactly the same way, just omit the chicken and use vegetable stock.

Recommended Tools for This Recipe 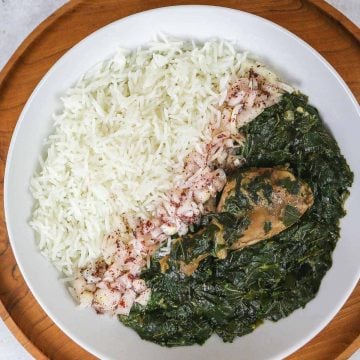 To Make the Onion Sumac Mix:

This recipe was first published on Little Sunny Kitchen on April 11, 2016. It was updated with more pictures and information on Nov 27 2018. The recipe remained the same.